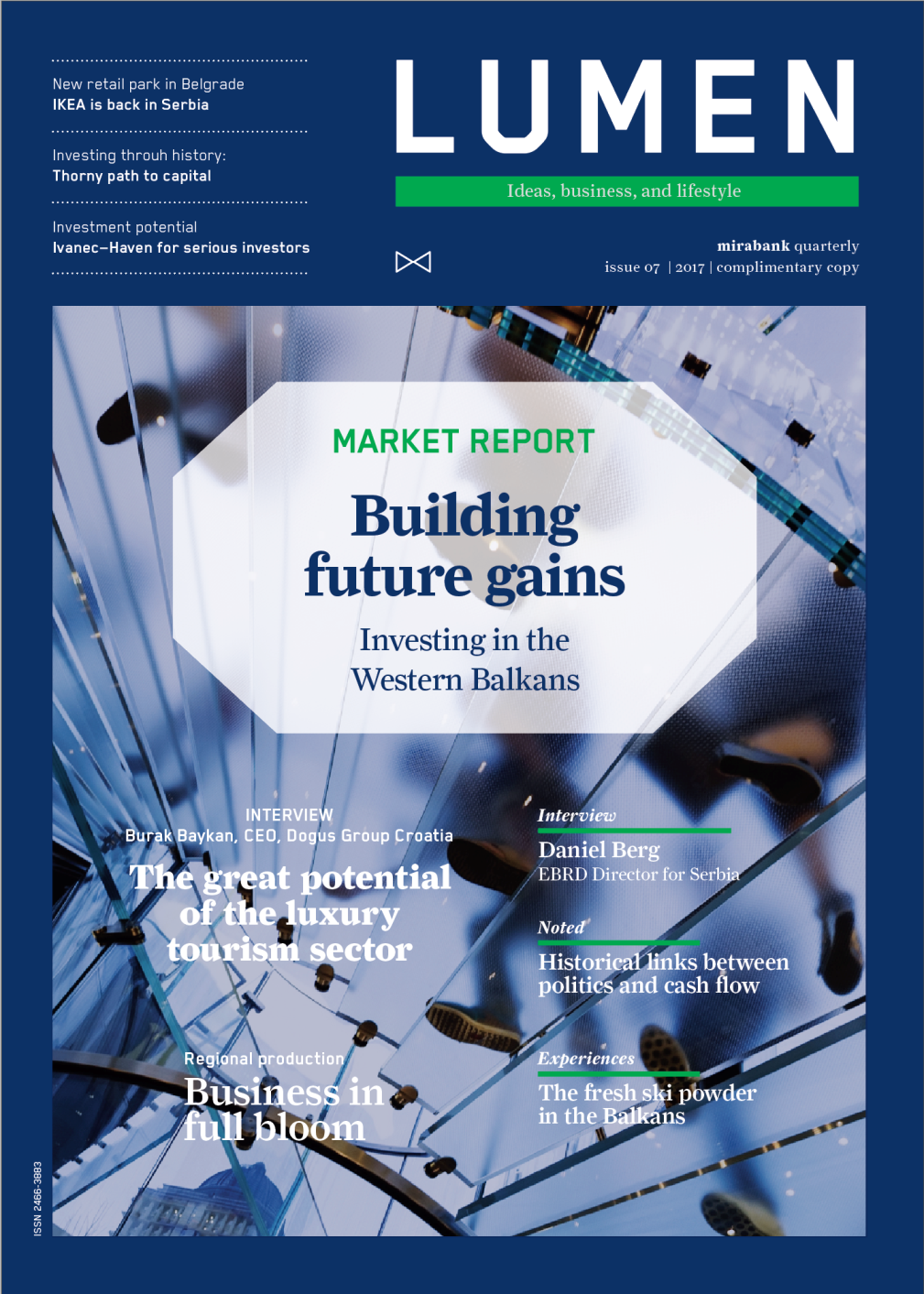 As global investors search for yield in conditions of slow growth, low interest rates, and ample liquidity in developed countries, capital finds its way to emerging markets. Flows of foreign direct investment (FDI), portfolio equity, and portfolio debt to emerging markets are once again projected to grow. Our PwC colleagues have learned that CEOs and investment professionals around the world are upbeat about global economic growth prospects for 2017/2018 despite the increasingly uncertain global political landscape.

This issue of Lumen and our special market reports investigate the investment climate in the Western Balkans, up-to-date experiences, and investment opportunities. Despite having opened up their economies to trade and investment in the late 1990s and early 2000s, the Western Balkan economies are still struggling to attract levels of investment similar to those the European Union, Central Europe, and the Baltics have gained. The average FDI stock per capita in 2014 in the Western Balkans was around €2,600, while in the European Union, it was around €14,300, more than five times higher. On the positive side, this means that there are still numerous untapped opportunities for investors to consider. In the latest Financial Times’ data division’s report, Serbia ranks first in a global greenfield foreign direct investment performance index.

The report presents data about tourism as the key industry sector in Croatia; it generated around US$9 billion or 18% of GDP in 2016. Croatia’s key tourist attraction is its beautiful, thousand-mile-long Mediterranean coastline with 1,185 islands (only 66 populated), ideal for maritime tourism.

This issue of Lumen brings an exclusive interview with Burak Baykan, the regional director of the Turkish Dogus Group, one of the largest foreign investors in the Croatian tourism sector. Dogus Tourism Group operates in hotel and marina management in Turkey, Greece, Croatia, Italy, the United States, the Caribbean, and Spain. In seven years of doing business in Croatia, the Group invested €250 million, and it plans to extend its portfolio.

Croatia is also a home of Europe’s most desirable micro-city for business investment—Ivanec. Special economic zones (SEZ) and their accompanying incentives have become one of the critical drivers in the intensifying regional competition for foreign direct investment. The number of zones in the region has almost doubled over the past four years, from 24 in 2012 to 39 in 2016.

We have once again been inspired by four successful Balkan entrepreneurs who show how good ideas and small, family-owned shops can grow to become true gems of local businesses. Vladimir Jokanovic talked to Contact Insight (CI) from Novi Sad; he is successfully addressing a global problem—the news industry’s need for a tool that measures true performance of digital content, way more useful to both publishers and advertisers than are page views and clicks.

Maja Turkovic from the Sustainable Development Association fills us with some optimism about renewable energy sources (RES). Over the past decade, countries in the Western Balkans have made significant policy and legislative progress aimed at increasing the use of renewable energy sources and providing a higher level of legal security for investors.

Patient investors know to keep their eyes open because true value can often be uncovered in the most unexpected places. That definitely was the case with Apoxyomenos, an ancient Greek bronze statue of a young athlete found and photographed underwater by a Belgian tourist in 1996 in Mali Losinj, an island off the coast of Croatia. This Greek statue, dating from the second or first century BC, is unique not only in the Adriatic region but also in the world—just like some businesses and investors we present in this issue of Lumen.