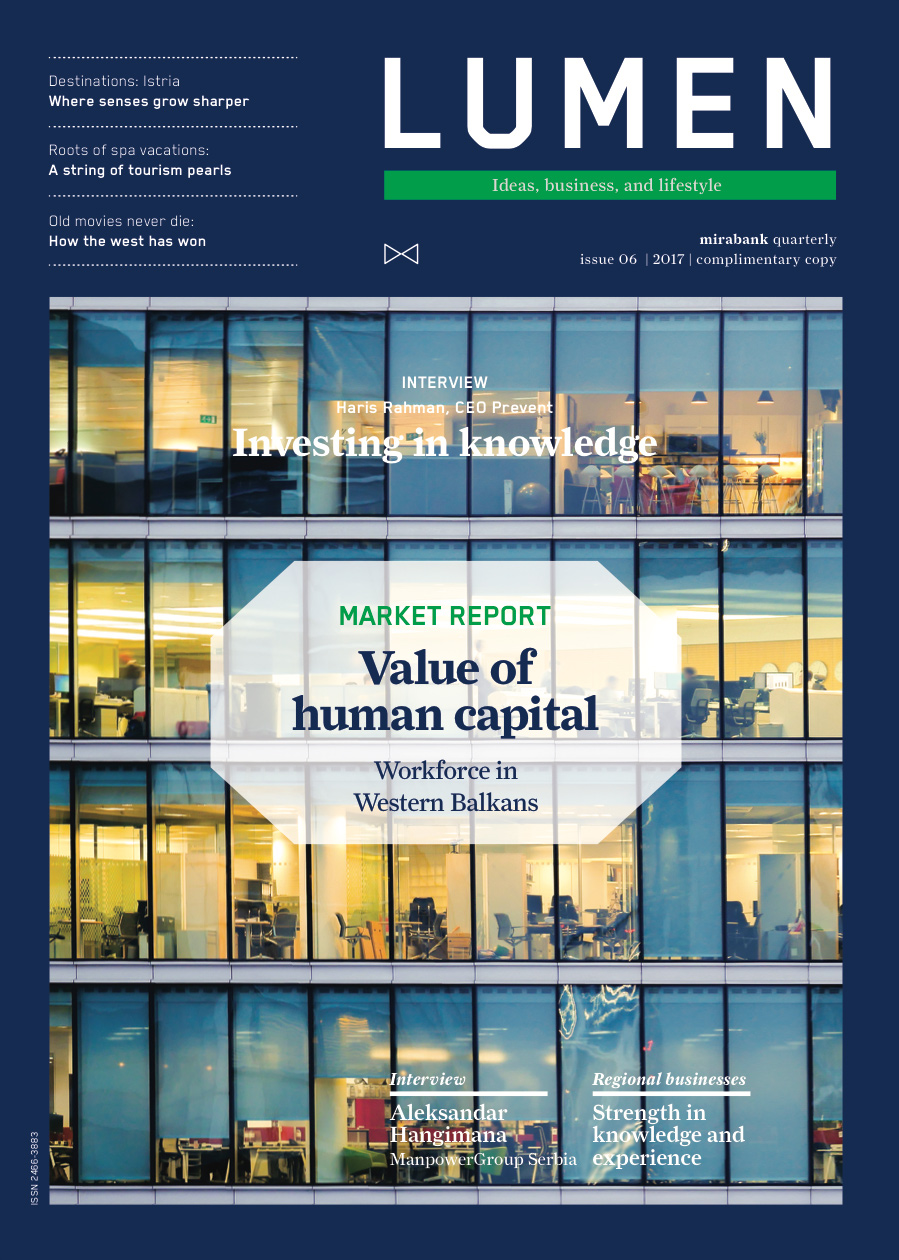 The development of human capital that matches the requirements of modern businesses is a challenge even in the most developed countries. With a rapidly ageing population and a welfare state under growing pressure, European economies are struggling to increase the labour supply in general and especially that of highly skilled workers.

The Lumen team has dedicated this issue to profiling the labour market in the region and presenting different views and perspectives on it. Still, business people, bankers, academics, experts, and journalists who write for this issue of Lumen didn’t offer diverging opinions—they all agree in their assessment of the market. “The fragile economic recovery that has taken off in the Western Balkan region risks being held back by an insufficient supply of workers with the skills needed by new, fast-growth businesses,” writes William Bartlett, senior visiting fellow at the London School of Economics; he reflects the sentiment of articles and reports in our market section.

Our special market report written by Goran Radosavljevic brings numbers and trends from Western Balkans labour markets. The average ratio of employed people to the working-age population in the region was 46.9 percent in 2015 compared to 70 percent in the EU-28 area. There were substantial variations across countries ranging from 25.8 percent in Kosovo to 55.1 percent in Albania. Weak labour market performance is a key social concern as it undermines medium- to long-term economic growth. Balkan countries also have some of the highest youth and long-term unemployment rates in Europe.

Aleksandar Hangimana confirms that his company, ManpowerGroup Serbia, has challenges in meeting the needs of investors in terms of providing the jobs their industries require. He says that the education in the region is too general especially when it comes to finance and the economy with no additional training and the expert knowledge the companies need.

Branislav Seslija explains that around 2,200 ICT companies in Serbia employ over 20,000 people. It is expected that the number will grow by 10 percent annually. Though the average gross salary is around €2,000 per month (far more than the €400 national average), 95 percent of the companies surveyed declared that they have difficulty finding quality employees, and 4 percent reported they found it nearly impossible to find new talent.

We also bring stories of successful business and initiatives who have overcome challenges of the market and successfully put in practice the soundbite often used by PR companies: for people, planet and profit.

Vladimir Jokanovic has travelled to Macedonia, Albania, Montenegro, and Bosnia and Herzegovina to talk to four businesses that put people first. Some of the most important workers for them are good welders and locksmiths, pickers and sorters of wildflowers, herbs, and fruit, and dairy producers. They hire local people who constantly learn and improve their skills and knowledge.

Lumen offers an exclusive interview with Haris Rahman, CEO of Prevent Group that employs 7,000 workers in 15 towns throughout Bosnia and Herzegovina. To address the lack of adequately trained resources in the job market, Prevent Group launched its own TAKT Academy. It provides training for young graduates and those with master’s degrees giving them knowledge and skills necessary to work in the fashion, textile, furniture, and auto industries. But this company understands that investing in early education is as important. Group’s Hastor Foundation has supported the education of over 2,000 young people and established cooperation with more than 150 elementary and high schools.

We can learn a lot from the experiences of Hyper Island, a creative business school with headquarters in Stockholm. Talents in the digital age need to be self-learners who actively update their skills like the operating systems on their mobiles. They also need the ability to collaborate and communicate across disciplines.

Dr. Jim Yong Kim, World Bank Group president, reiterated the need to invest more and more effectively in people in his speech at the London School of Economics this April: “Aspirations, linked to opportunity, can breed dynamism and inclusive, sustainable economic growth. We believe that the premium on human capital will get higher and higher every year.”