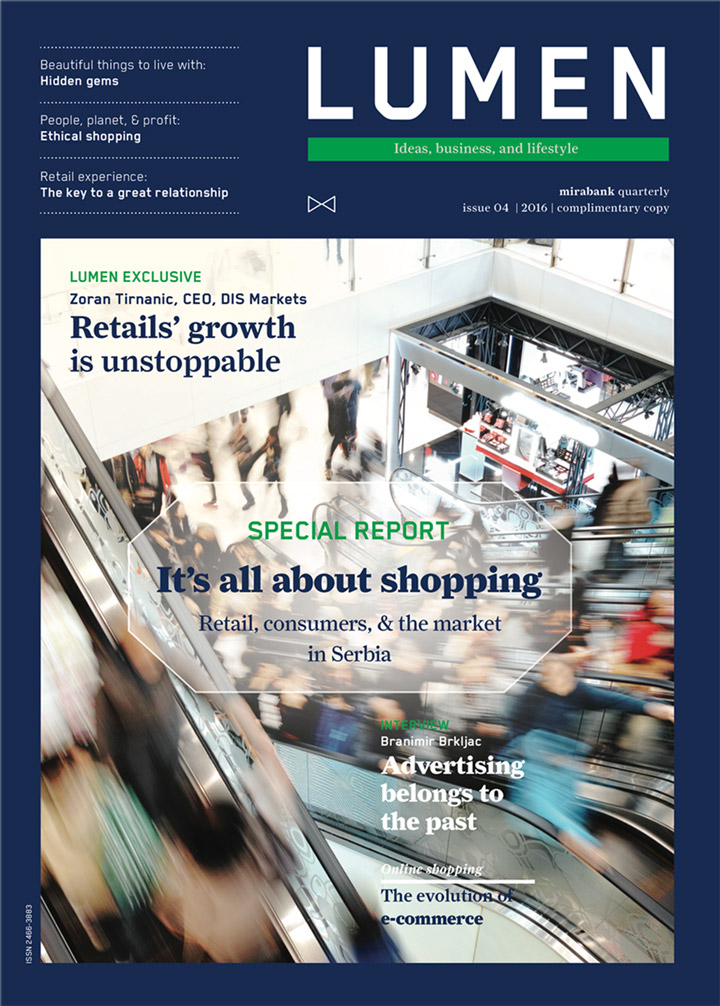 For this issue of Lumen, we chose to talk about the retail market in Serbia as well as the global trends toward consumption and overconsumption and what these mean for local and global economies. While investigating macroeconomic trends and individual success stories, we witnessed a true dilemma for policymakers, producers, and consumers who wish to move away from consumerism for social and environmental reasons but who still fundamentally believe that consumerism is essential to economic growth and widespread prosperity.

Our special market report shows the retail sector in Serbia has been the driver of positive economic trends over the last couple of years. Retail sector data show 4.1 percent y/y growth in the first quarter of 2016 and 3 percent y/y in the second quarter. This is the best performance of the sector in the past five years. The number of e-commerce credit card transactions in Serbia totaled 2.7 million in 2015 and were worth €110 million. Approximately 2 million e-commerce credit card transactions went through foreign websites and 750,000 through local websites; that represents a 20 percent increase as compared to 2014, and as is the case elsewhere in the world, e-commerce is the most vibrant area of retail.

This region has had a long tradition of trade, and most big towns developed along important trade routes. Professor Vesna Aleksic writes that the most notable medieval trade route through Serbia was the Constantinople Road, which connected the central Balkan Peninsula with the Middle East. “This road passed through many medieval Serbian towns that played important roles as local or international trade hubs.”

Serbian retail and trade has gone a long way since then, but the lengthy tradition of buying frequently from small, local grocers is still here. Not surprisingly, one of the largest grocery retailers in Serbia, DIS, is a family owned business. The chain has extended its business model through more than 400 local franchises, and its retail brand, Dobro (eng. good), targets the conscious consumer who wants to know the produce well and knows its value as well as its cost. In an exclusive interview with Lumen, DIS founder and CEO Zoran Tirnanic says that his company’s slogan reflects its mission to provide better quality for less.

Through this issue, we bring stories about successful entrepreneurs who are finding new and unusual ways to create and sell their products to customers they understand. “You won’t find them on billboards or TV commercials or in glittering shop windows; they aren’t trying to invade everyone’s space. They are dedicated to special customers and can be found through websites or in shops with a select range of products,” writes Antonela Riha. They confirm what Slobodan Jovanovic writes about: “Traditional demographic models that brands have so carefully perfected over the past decades are an increasingly inadequate descriptor of the new consumer. People of all ages and incomes and in all markets are constructing their own identities more freely than ever.”

Branimir Brkljac, a true TV-commerce pioneer, confirms this shift of the consumer markets from focusing on products to focusing on people. “It’s no longer about selling our products to as many people as possible but rather about finding out what kind of products people want,” says Brkljac in an interview with Ana Roland. He adds, “Real insight is still very important, and the only way to get it is by directly interacting with the customers.”

This issue of Lumen is exactly about those businesses that have chosen different paths when it comes to making a profit by taking people and the planet into consideration as well, as Matt Morely beautifully explains. According to recent research from Havas, “Seven in 10 respondents agree that overconsumption actually is putting our society and the planet at risk while only 8 percent disagree.”

We support those who think the answer lies not simply in consuming less but above all in consuming smarter. And right there is our excuse for indulging in “smart” shopping choices and experiences during the holiday season.