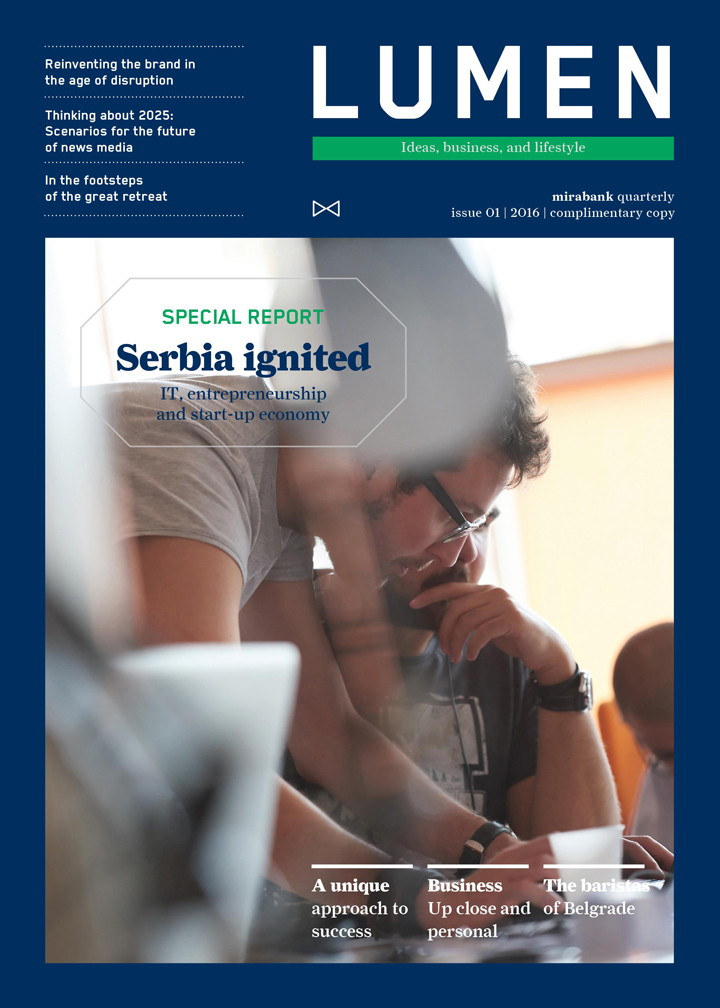 Is it possible that the Serbian economy, or even the European economy for that matter, can be changed for the better
by a new generation of entrepreneurs, freelancers, investors and innovators? After reading the rst issue of Lumen you will see why I rmly believe this not only possible but also inevitable.

Most of the topics that we have covered in the rst issue of Lumen are in one way or another talking about teams, collaboration, mentors and role models as the special magic ingredient behind the success of a business.

The interview with Dr. Ilinca Rosetti, a new inspiring leader in the Serbian banking sector, reminded me that the main thing investors look for, when choosing a project to support, is a good team. Ms Rosetti confirms that she firmly believes that people are the key drivers of success.

Four entrepreneurs were interviewed about their companies by Antonela Riha for the article titled “Business, up close and personal”. They describe a new kind of collaborative economy as well as the role of start-up incubators for developing small businesses in a contemporary marketplace. They say that the start-up and entrepreneurship community has come a long way from a typical corporate, highly competitive market. The community that they portray is connected, where new companies help each other by sharing information and contacts. Instead of behaving like enemies, different companies work as a team to grow and succeed alongside each other.

In recent years, technology is having a disruptive impact on how people live and work, therefore profoundly changing the ways we collaborate. Technology is also having a direct impact on the economics of what we sell and consume.

From the numbers that Danica Radisic sourced for the report on start-up economy and ICT sector, we can see that the Serbian outsourcing market is one of the most successful within

the international freelance scene. Apparently, freelancers from the Balkans are some of the most respected, reliable and sought-after employees and collaborators on the online job platforms.

This information is also con rmed by Sasa Arsic, who writes about co-working hubs in the region. The co-working buzz is ever-present and there are reportedly more than 30 spaces across the region, from small home-based initiatives to 1000+ m2 former industrial spaces.

It has been over ten years since Clay Shirky,
the author of “Here Comes Everybody: The Power of Organizing Without Organizations” and a professor at the New York University, showed how closed groups and companies
give way to more extended networks where small contributors have big roles and uid cooperation replaces rigid planning. This future has nally arrived in Serbia and across the region, and it has the potential to create more jobs, improve education, boost the economy and enhance lives in general.

Unsurprisingly, Lumen itself is a result of the teamwork of an extended network of great professionals at mirabank, Coba&associates and a fantastic group of authors.

There are so many other examples encountered in Lumen of how lives can change and improve when we work together in teams. Making Lumen happen is just one of those.